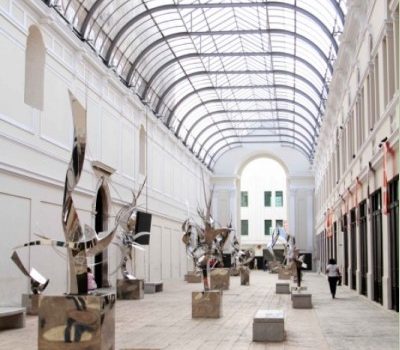 Museum goers, make sure to visit the Nierman exhibit at the newly refurbished Pasaje Revolución, the wide passage way separating the cathedral and the museum of contemporary art – MACAY.

It is best to visit the exhibit early morning to avoid the heat (sorry, no air conditioning), or late afternoon since sunlight  lasts longer as we move towards summer.   As you would expect,  due to its locations there is no admission fee.

Leonardo Nierman Mendelejis (born 1932) is a Mexican artist and sculptor. Often referred to as the Jackson Pollock of Latin art, his work is known for its vibrant color.

Born in Mexico City on November 1, 1932 to parents of Eastern European descent, his first artistic endeavors were in the field of music. Academically, he was interested in both physical and mathematical sciences, and graduated from the National Autonomous University of Mexico with a Bachelor’s degree in physics and mathematics in 1951.Upon graduating, Nierman turned his attention to painting while applying his knowledge of music, physics and mathematics to his art. These traits, especially music, are readily seen throughout his work.

The beginning of his career in the arts goes back to the fifties. His early work account for influences of the time: Kandinsky, Klee, Miró, de Chirico and the currents of abstraction and cubism and surrealism.

His creativity, inspired by music, has given a clearer concept of time and the brevity of life, “Music and painting are very similar. Both have tones, rhythm, space-intensive and relaxation areas. ”
the artist explains, “everything has an abstract approach, just a matter of distances in relation to the eye looking. If we approach the wood or precious stones, even the skin of our body, we enter into a microcosm, which appear in many forms and colors in its purest form. “

In 1969, Nierman was awarded the prestigious Palm d’Or des Beaux Arts, Monaco. He has held numerous exhibitions around the world and his works are held in many public collections including the Tel Aviv Museum of Art in Israel and the Museum of Fine Arts in Boston, Massachusetts. In 1993 he became Patron of the Academy of St. Martin of the Fields, London and in 1995 he was awarded Doctor Honoris Causa, Concordia University, Irvine, California.