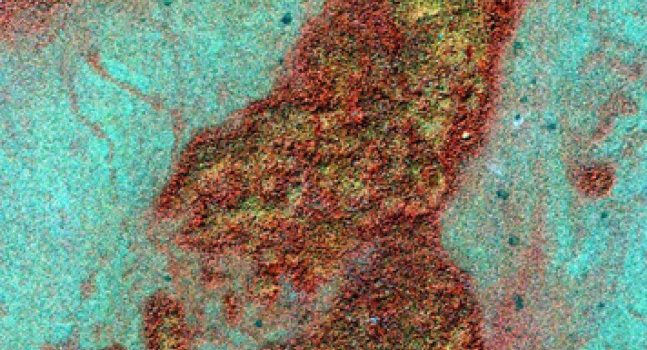 Spotting ancient Maya ruins — a challenge even on the ground — has been virtually impossible from the sky, where the dense Central American rainforest canopy hides all but a few majestic relics of this mysterious civilization. Now, NASA archaeologist Dr. Tom Sever and scientist Daniel Irwin of NASA’s Marshall Space Flight Center in Huntsville, Ala., and archaeologist Dr. William Saturno of the University of New Hampshire in Durham are using advanced, space-based imaging technology to uncover the ruins. High-resolution satellite imaging, which detects variations in the color of plant life around the ruins, can pinpoint sites of Maya settlements from space. The research, primarily conducted at the National Space Science and Technology Center in Huntsville and the University of New Hampshire, is made possible by a partnership between NASA and the Guatemalan Institute of Anthropology and History. (NASA/T. Sever)

Remains of the ancient Maya culture, mysteriously destroyed at the height of its reign in the ninth century, have been hidden in the rainforests of Central America for more than 1,000 years. Now, NASA and university scientists are using space- and aircraft-based “remote-sensing” technology to uncover those ruins, using the chemical signature of the civilization’s ancient building materials.

NASA archaeologist Tom Sever and scientist Dan Irwin, both from NASA’s Marshall Space Flight Center in Huntsville, Alabama, are teaming with William Saturno, an archaeologist at the University of New Hampshire in Durham, to locate the ruins of the ancient culture.

“From the air, everything but the tops of very few surviving pyramids are hidden by the tree canopy,” said Sever, widely recognized for two decades as a pioneer in the use of aerospace remote-sensing for archaeology. “On the ground, the 60- to 100-foot trees and dense undergrowth can obscure objects as close as 10 feet away. Explorers can stumble right through an ancient city that once housed thousands — and never even realize it.”

Sever has explored the capacity of remote sensing technology and the science of collecting information about the Earth’s surface using aerial or space-based photography to serve archeology. He and Irwin provided Saturno with high-resolution commercial satellite images of the rainforest, and collected data from NASA’s Airborne Synthetic Aperture Radar, an instrument flown aboard a high-altitude weather plane, capable of penetrating clouds, snow and forest canopies.

These resulting Earth observations have helped the team survey an uncharted region around San Bartolo, Guatemala. They discovered a correlation between the color and reflectivity of the vegetation seen in the images — their “signature,” which is captured by instruments measuring light in the visible and near-infrared spectrums — and the location of known archaeological sites

In 2004, the team ground-tested the data. Hiking deep into the jungle to locations guided by the satellite images, they uncovered a series of Maya settlements exactly where the technology had predicted they would be found. Integrating cutting-edge remote sensing technology as a vital research tool enabled the scientists to expand their study of the jungle.

The cause of the floral discoloration discerned in the imagery quickly became clear to the team. The Maya built their cities and towns with excavated limestone and lime plasters. As these structures crumbled, the lack of moisture and nutritional elements inside the ruins kept some plant species at bay, while others were discolored or killed off altogether as disintegrating plaster changed the chemical content of the soil around each structure.

“Over the centuries, the changes became dramatic,” Saturno said. “This pattern of small details, impossible to see from the forest floor or low-altitude planes, turned out to be a virtual roadmap to ancient Maya sites when seen from space.”

Under a NASA Space Act Agreement with the University of New Hampshire, the science team will visit Guatemala annually through 2009, with the support of the Guatemalan Institute of Anthropology and History and the Department of Pre-Hispanic Monuments. The team will verify their research and continue refining their remote sensing tools to more easily lead explorers to other ancient ruins and conduct Earth science research in the region.

“Studies such as these do more than fulfill our curiosity about the past,” Sever said. “They help us prepare for our own future

Scientists believe the Maya fell prey to a number of cataclysmic environmental problems, including deforestation and drought, that led to their downfall, Irwin said. “The world continues to battle the devastating effects of drought today, from the arid plains of Africa to the southern United States,” he said. “The more we know about the plight of the Maya, the better our chances of avoiding something similar.”

Another aspect of the research involved using climate models to determine the effects of Maya-driven deforestation on ancient Mesoamerican climate. The goal of this effort was to determine whether deforestation can lead to droughts and if the activities of the ancient Maya drove the environmental changes that undermined their civilization.

Extending benefits of remote-sensing technologies is part of NASA’s Earth-Sun System Division. NASA is conducting a long-term research effort to learn how natural and human-induced changes affect the global environment, and to provide critical benefits to society today.