May 4, 2018 By Yucatan Connection Articles No Comments 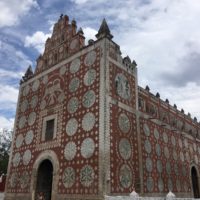 Uayma is often bypassed by Valladolid visitors, in spite of it’s proximity (a 10 minute drive).  The town does not have the “pueblo mágico” distinction, but it is definitely worth a visit.

Uayma is a small town located in the center of the Yucatán Peninsula, about 15 kilometers north and west of Valladolid. In colonial times Uayma was a major stop on the El Camino Real between Merida and Valladolid (the third largest city in the state).

The striking landmark is the church – a former Santo Domingo de Guzmán convent, originally built by the Spaniards to enforce their culture in Uayma, which was at the time an important Mayan center. Stones from nearby Mayan structures were used to build the church (a common practice across the region), some of which can be seen on the facade. Building started around 1646, but it was destroyed in the 19th century during the Guerra de Castas (caste war).  Other colonial structures and more recently built structures, including a railway station, remain in various states of disrepair around the town.

Renovation of the town’s unique church was completed in 2005. Restoration was completed due to the efforts of Elba Villareal de Garcia Ponce and Fernando Garces Fierros, through both a private program called Adopte una Obra de Arte (Adopt a Work of Art) and the government’s Institute of Anthropology and History, or INAH.

There is no accurate data on when the town was founded, though it existed before La Conquista (the conquest) and in antiquity belonged to the chieftainship of Cupules. During colonial times, Uayma became part of the encomienda system (a disguised slavery-type system) with the first recorded encomendero as Juan Bellido 1549-1579.